Your login has always been case-sensitive. This wasn’t correctly implemented since yesterday. So if you have problems logging in, check the spelling of your login.

The rest of todays' news in english…

The later one brings one feature back that was missing since the old version, namely spatial search. You can now run spatial searches for your pictures and tweets: 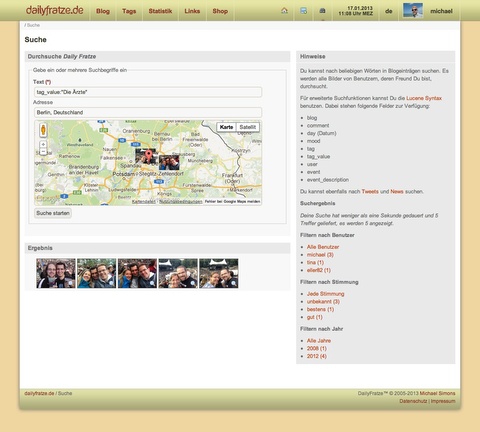 The mouse hover text on the pictures shows you the distance to the given address. You also see the new search facets to the right that can filter the search by a given facet. 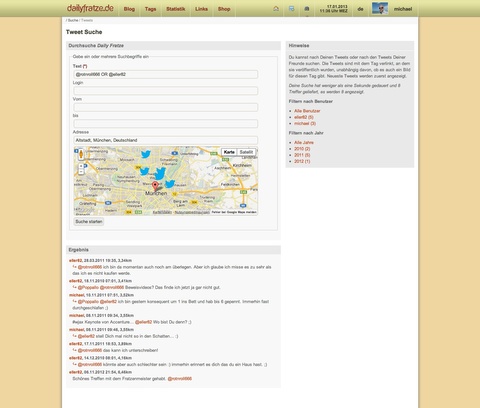 What you see there as well is the new address picker that is also used on the redesigned dialogues for saving the location of a picture and creating events.

I’ve really enjoyed working with the Hibernate Search team and i hope i could give a little bit back. Thanks @SanneGrinovero, @NHelleringer, @emmanuelbernard and others for your great work.

The next visible thing are those: 💩 (For those having an older OS, that’s a pile of poo:

) Don’t worry, there are more Emojis than this one. I’ve patched several libraries (among those is JSoup) to be able to handle them correctly. On the way doing this i found a bug in github.com (you’re not able to post those there). If they have questions on how to configure a MySQL database to handle them, you’ll find me email address in the imprint

Windows 7 should handle them as well if you install this update but i had no success in doing so. They work well on iOS >= 5, recent versions of Mac OS X and *shudder* Windows 8.

Than there some smaller improvements:

I hope you like those changes as much as i do.

Your session has been invalidated, please reload the page or login again.